Simulation of spatial model showing dynamics over 1000 timesteps of A (blue) and B (green) cooperators, as well as dormant A (red) and B (yellow) cells, on a 2D plane. Black edges are present to distinguish between cells.

Interactions between species or strains can be considered mutualistic when each species benefits from the presence of the other. Mutualisms are very common in nature, such as the relationship between plants and their insect pollinators. In bacteria, one form of mutualism occurs when different strains produce resources that can be used by different strains. However, while receiving benefits from a mutualistic partner can increase growth of an organism, producing the benefits for that partner might be costly. These costs may inhibit the evolution of these mutualisms or perhaps lead to cheating, where some individuals receive the benefits of the mutualism without producing any costly resources themselves.

Dormancy, where certain individuals become inactive for some time, may help to stabilize these relationships. For instance, while the costs of mutualism may lead to a disadvantage when resources are abundant, the mutualism may still be beneficial when resources are scarce. A seed bank of dormant cells may allow mutualistic cells to persist when selection favors cheaters until periods where it favors cooperation. Additionally, environmental stochasticity can lead to extinction of one of the two partners by chance. A seed bank can drastically reduce this probability by maintaining a reserve of individuals of both partners.

To model situations where dormancy can help maintain cooperation, I developed two individual-based models (IBMs): one non-spatial, and one spatial. Both implement cells as the primary individuals, or agents, and these cells can be of two types existing in a single population. They both share a common resource and produce secondary resources that can only be used by the other cell type. Both implement stochastic processes and allow individuals to make decisions based upon their current attributes. For more information about implementation, please go to the project GitHub repo.

These models have shown that when two mutualistic species are capable of dormancy, they can coexist in the long-term despite extreme resource limitation. Normally, without dormancy, neither species can survive, and without cooperation, one strain will go extinct. With both dormancy and mutualism, both are maintained. In the future, both models will require thorough parameter sweeps to identify precise parameters where dormancy increases the probability of coexistence. 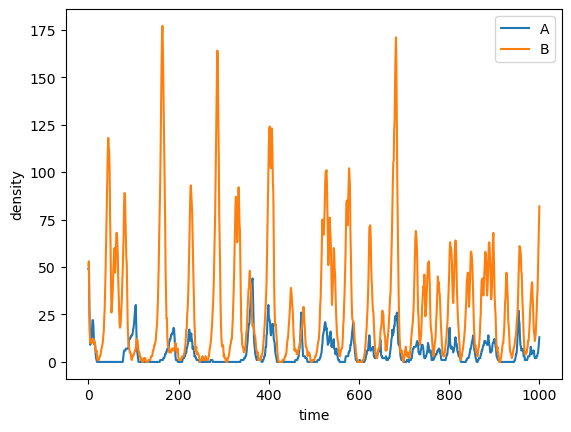 Despite long periods of energy limitation, dormancy helps mutualist survive and coexist in the long-term. 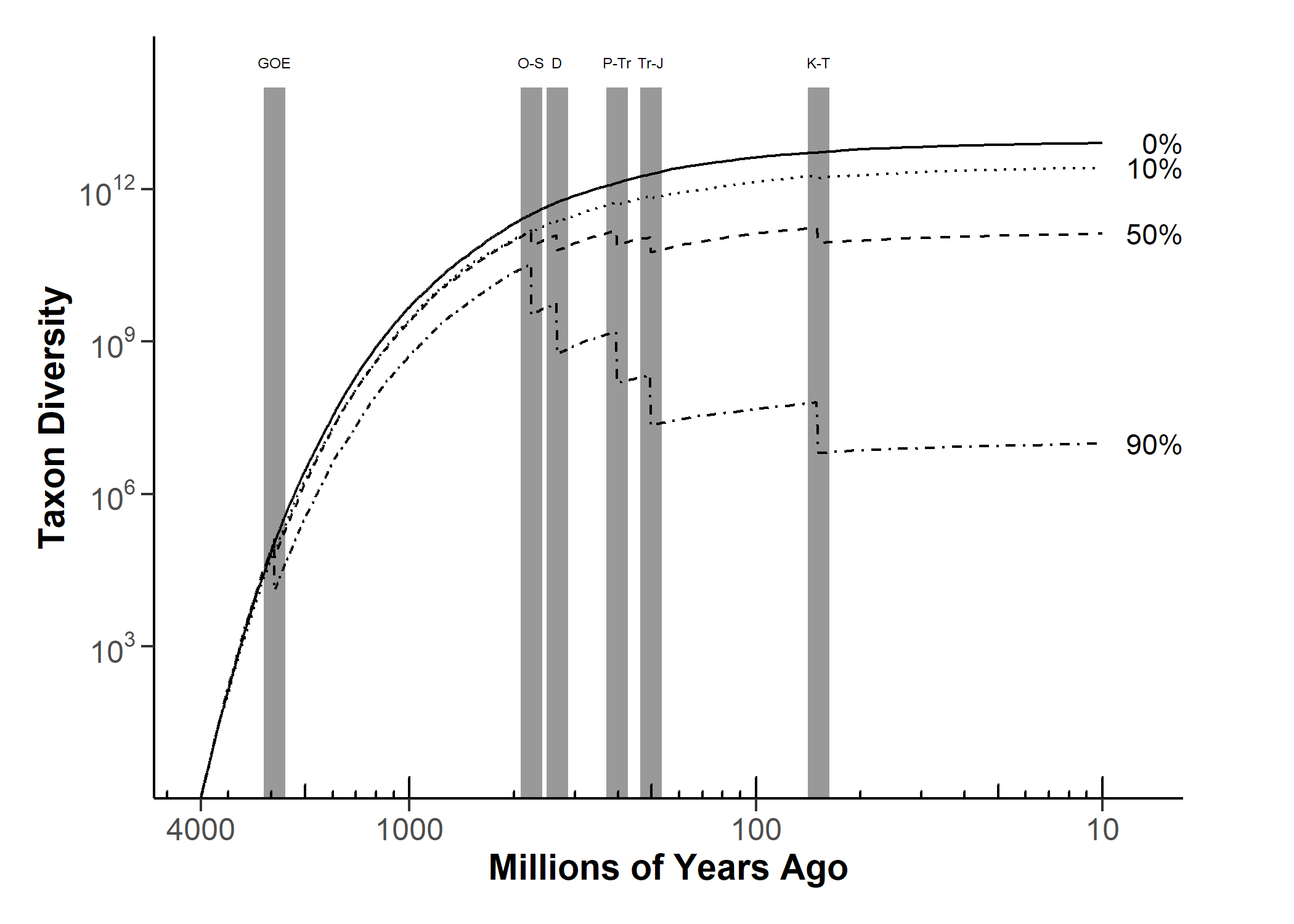 It is difficult enough to count up all of the animal and plant species on the planet. However, this task is even more challenging for microbes. Most bacteria that can be detected from DNA sequencing approaches cannot even be grown in the lab, and the vast majority of the globe has not been properly sequenced for its microbial content. While several attempts have been made to estimate the extent of present-day microbial diversity, the estimations range from 106 to 1012, and there is no way to directly test these estimates.

With this logic, I used estimates of diversification rates of bacteria to fit stochastic birth-death models. As there is no direct fossil record of bacteria, these estimates were taken from the symbiotic bacteria of insects that had fossil records themselves. I also used models that included global mass extinction events. Our results found that while the outcome of millions of species is marginally more likely than billions or trillions, many combinations of parameters can lead to even higher than trillions of species, even when accounting for mass extinction events. This study is currently being written up into a manuscript for submission for publication. 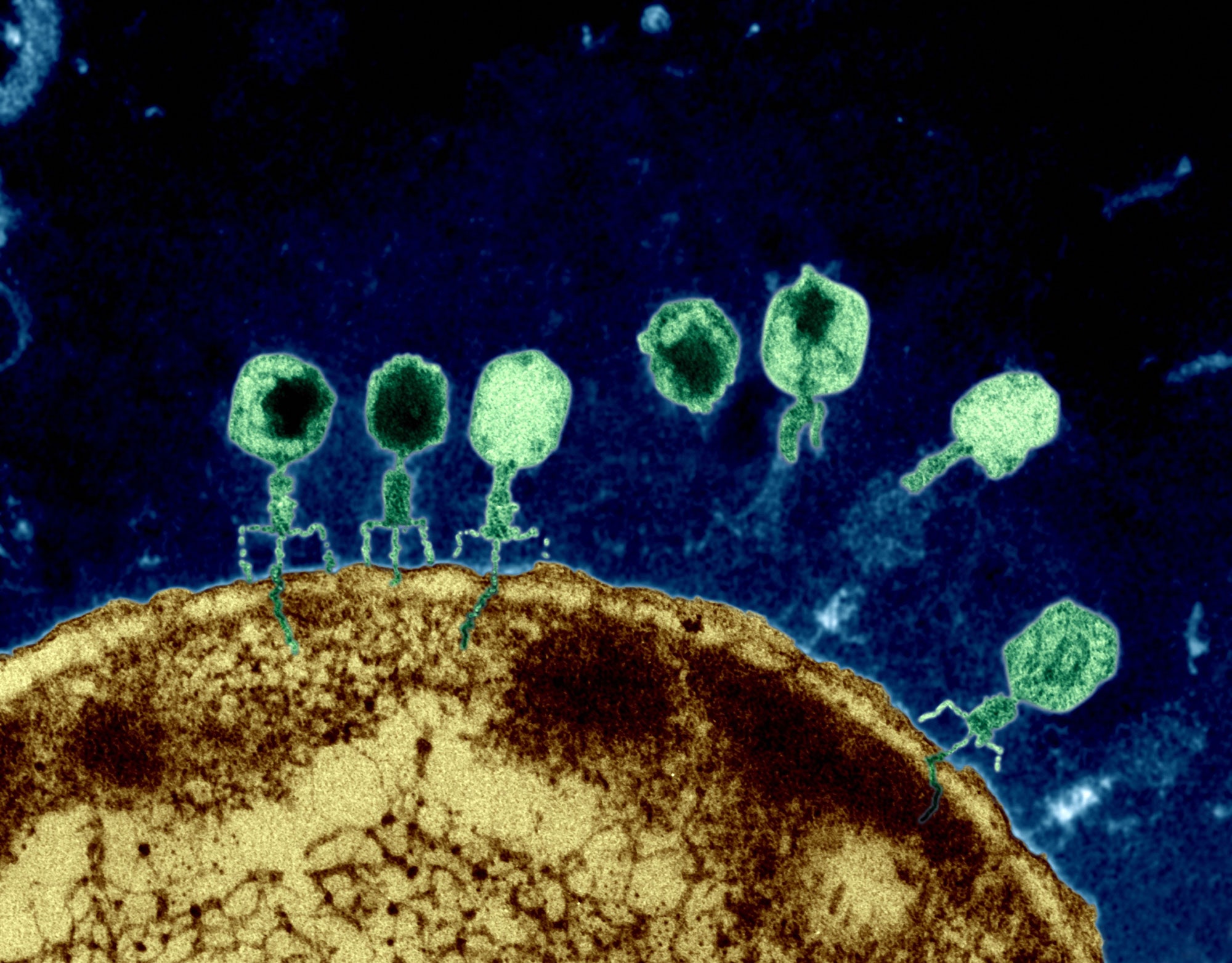 Like all organisms, bacteria deal with infections from viruses. These antagonistic interactions with bacteria-infecting viruses, also called bacteriophages or phages, decrease the survival of bacteria. To limit these negative interactions, bacteria must evolve ways to defend themselves and resist phage infection. This resistance can manifest itself in several forms: modifying the surfaces to which phages need to attach, destroying invasive DNA or RNA once inside the host or even early cell death to prevent larger outbreaks.

These mechanisms are only a small portion of the vast array of ways bacteria can defend themselves against phages. Why do so many mechanisms exist? One potential explanation is the other side of this picture: phage evolution. Phage mutations that can overcome the defense mechanisms of their bacterial hosts confer advantages to these new mutants. These new mutations can lead to new responses in the hosts to combat these new and improved phages, thus starting a cycle of coevolution between host and virus.

This coevolution is the focus of my eco-evolutionary simulation model currently called CommunityImmunity. In this model, host and phage strains are allowed to mutate and create new strains that may be phage-resistant or new phages that may have a larger host range. The demographic information of all strains is tracked and partially determines the frequency of mutation. I am currently using this model to explore the impact of increasing host and phage mutation rate on the outcome of each simulation and the mode of coevolution.